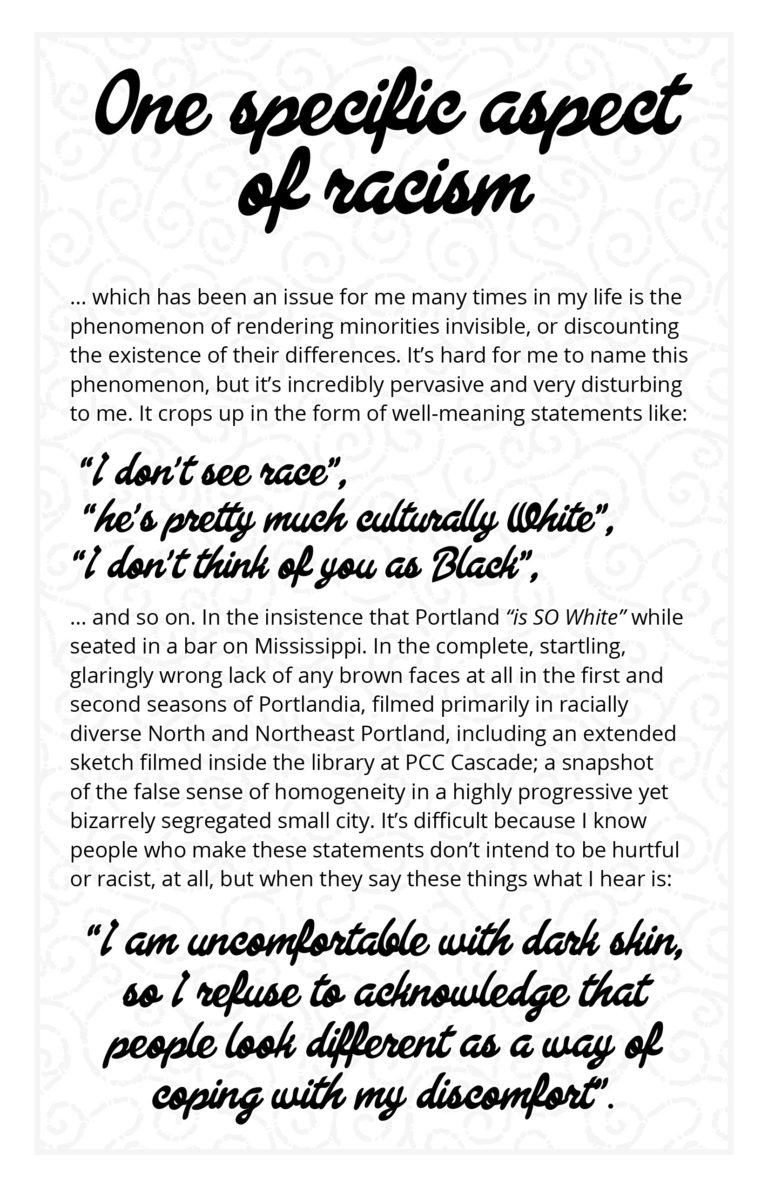 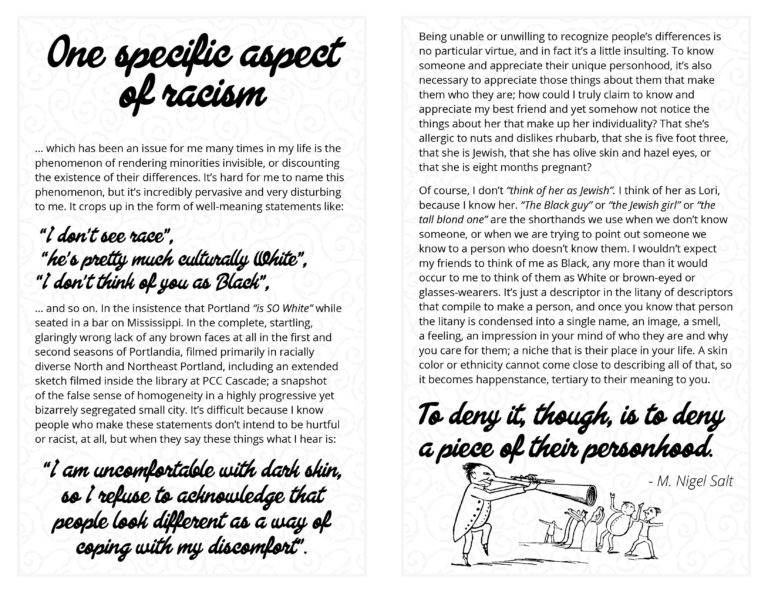 One specific aspect of racism
… which has been an issue for me many times in my life is the phenomenon of rendering minorities invisible, or discounting the existence of their differences. It’s hard for me to name this phenomenon, but it’s incredibly pervasive and very disturbing
to me. It crops up in the form of well-meaning statements like:

… and so on. In the insistence that Portland “is SO White” while seated in a bar on Mississippi. In the complete, startling, glaringly wrong lack of any brown faces at all in the first and second seasons of Portlandia, filmed primarily in racially diverse North and Northeast Portland, including an extended sketch filmed inside the library at PCC Cascade; a snapshot of the false sense of homogeneity in a highly progressive yet bizarrely segregated small city. It’s difficult because I know people who make these statements don’t intend to be hurtful or racist, at all, but when they say these things what I hear is:

“I am uncomfortable with dark skin, so I refuse to acknowledge that people look different as a way of coping with my discomfort”.

Being unable or unwilling to recognize people’s differences is no particular virtue, and in fact it’s a little insulting. To know
someone and appreciate their unique personhood, it’s also necessary to appreciate those things about them that make them who they are; how could I truly claim to know and appreciate my best friend and yet somehow not notice the things about her that make up her individuality? That she’s allergic to nuts and dislikes rhubarb, that she is five foot three, that she is Jewish, that she has olive skin and hazel eyes, or that she is eight months pregnant?

Of course, I don’t “think of her as Jewish”. I think of her as Lori, because I know her. “The Black guy” or “the Jewish girl” or “the
tall blond one” are the shorthands we use when we don’t know someone, or when we are trying to point out someone we know to a person who doesn’t know them. I wouldn’t expect my friends to think of me as Black, any more than it would occur to me to think of them as White or brown-eyed or glasses-wearers. It’s just a descriptor in the litany of descriptors that compile to make a person, and once you know that person the litany is condensed into a single name, an image, a smell, a feeling, an impression in your mind of who they are and why you care for them; a niche that is their place in your life. A skin color or ethnicity cannot come close to describing all of that, so
it becomes happenstance, tertiary to their meaning to you.

To deny it, though, is to deny a piece of their personhood.
– M. Nigel Salt