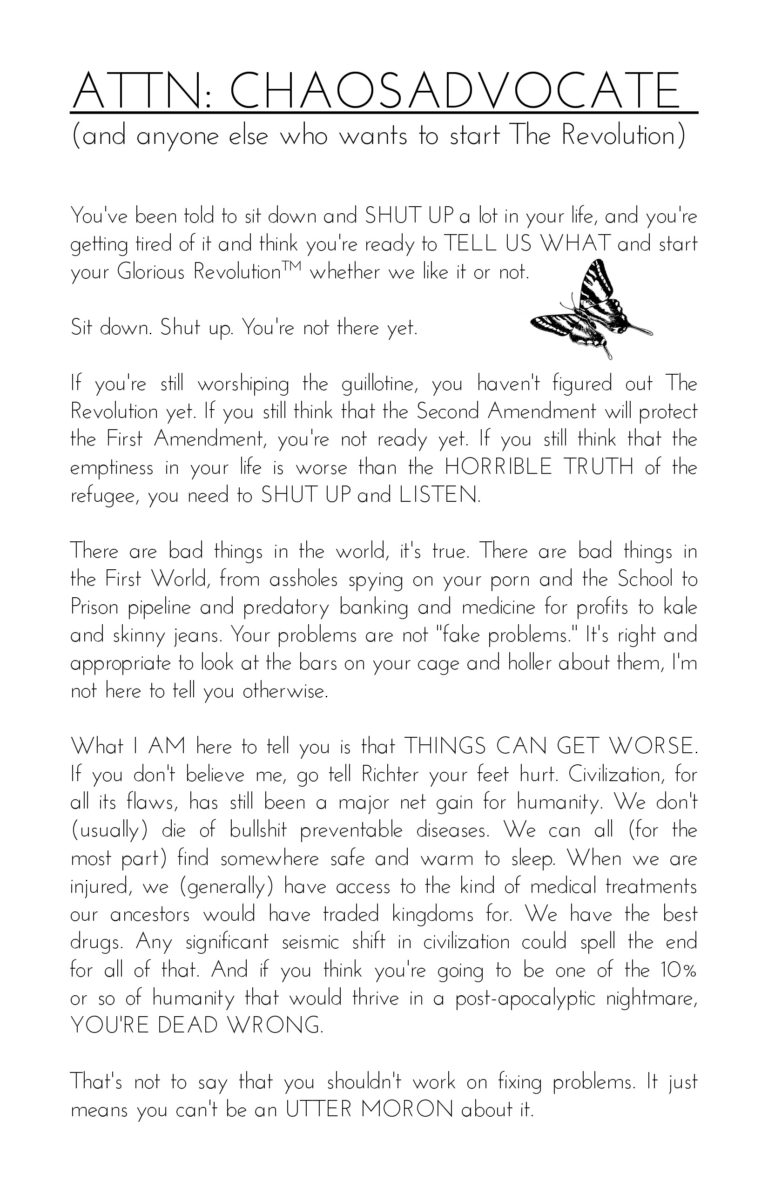 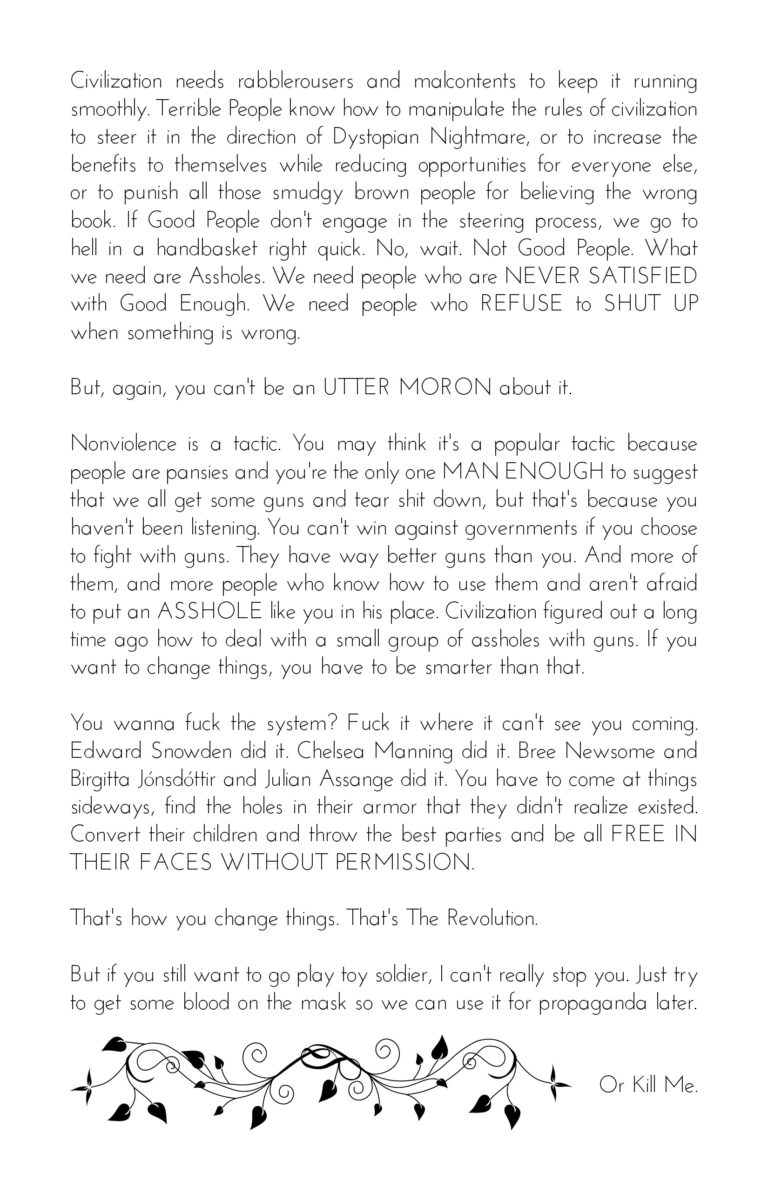 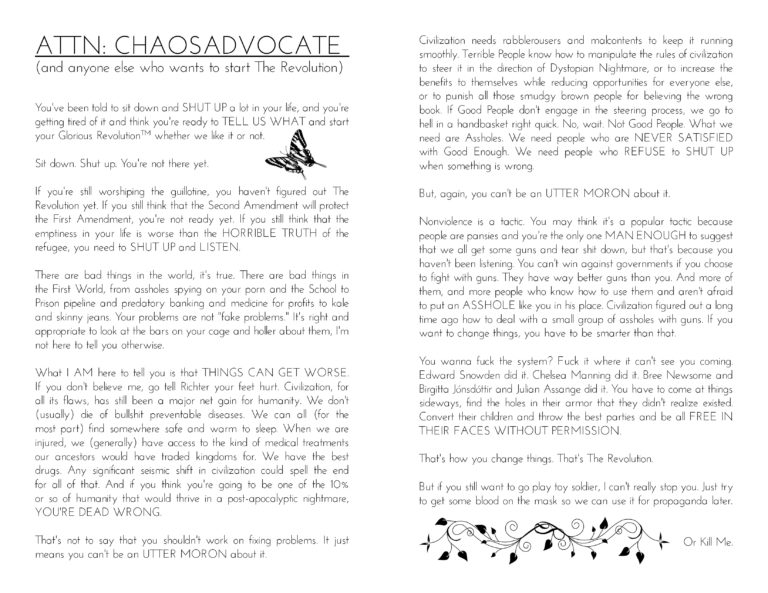 ChaosAdvocate was a real user on the PeeDee forums who got this silly idea in his head that none of us were strong or smart or brave enough to rush to violence in our pursuit of The Revolution. That we were clearly sheeple because we weren’t cheering him on for talking a lot about wanting to shoot up the joint. This was my response.

Attn:ChaosAdvocate
(and anyone else who wants to start The Revolution)

You’ve been told to sit down and SHUT UP a lot in your life, and you’re getting tired of it and think you’re ready to TELL US WHAT and start your Glorious RevolutionTM whether we like it or not.

Sit down. Shut up. You’re not there yet.

What I AM here to tell you is that THINGS CAN GET WORSE. If you don’t believe me, go tell Richter your feet hurt. Civilization, for all its flaws, has still been a major net gain for humanity. We don’t (usually) die of bullshit preventable diseases. We can all (for the most part) find somewhere safe and warm to sleep. When we are injured, we (generally) have access to the kind of medical treatments our ancestors would have traded kingdoms for. We have the best drugs. Any significant seismic shift in civilization could spell the end for all of that. And if you think you’re going to be one of the 10% or so of humanity that would thrive in a post-apocalyptic nightmare, YOU’RE DEAD WRONG.

That’s not to say that you shouldn’t work on fixing problems. It just means you can’t be an UTTER MORON about it.

Civilization needs rabblerousers and malcontents to keep it running smoothly. Terrible People know how to manipulate the rules of civilization to steer it in the direction of Dystopian Nightmare, or to increase the benefits to themselves while reducing opportunities for everyone else, or to punish all those smudgy brown people for believing the wrong book. If Good People don’t engage in the steering process, we go to hell in a handbasket right quick. No, wait. Not Good People. What we need are Assholes. We need people who are NEVER SATISFIED with Good Enough. We need people who REFUSE to SHUT UP when something is wrong.

But, again, you can’t be an UTTER MORON about it.

Nonviolence is a tactic. You may think it’s a popular tactic because people are pansies and you’re the only one MAN ENOUGH to suggest that we all get some guns and tear shit down, but that’s because you haven’t been listening. You can’t win against governments if you choose to fight with guns. They have way better guns than you. And more of them, and more people who know how to use them and aren’t afraid to put an ASSHOLE like you in his place. Civilization figured out a long time ago how to deal with a small group of assholes with guns. If you want to change things, you have to be smarter than that.

You wanna fuck the system? Fuck it where it can’t see you coming. Edward Snowden did it. Chelsea Manning did it. Bree Newsome and Birgitta Jónsdóttir and Julian Assange did it. You have to come at things sideways, find the holes in their armor that they didn’t realize existed. Convert their children and throw the best parties and be all FREE IN THEIR FACES WITHOUT PERMISSION.

That’s how you change things. That’s The Revolution.

But if you still want to go play toy soldier, I can’t really stop you. Just try to get some blood on the mask so we can use it for propaganda later.