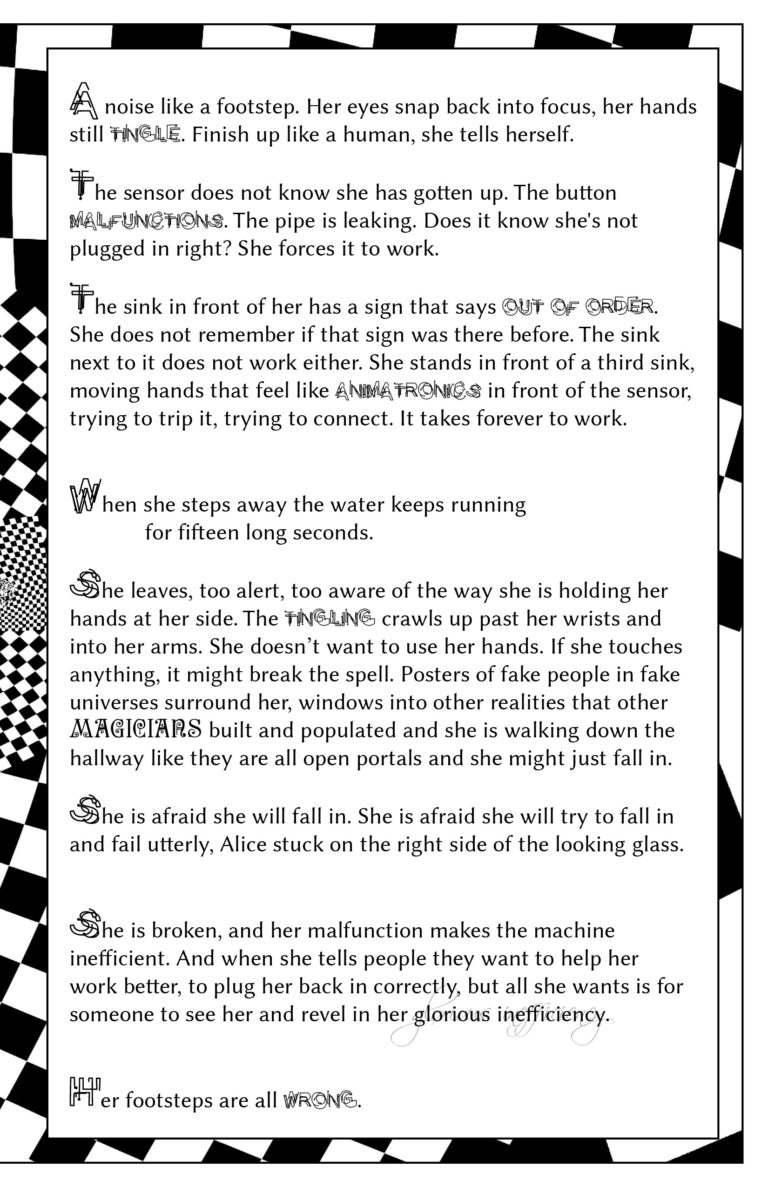 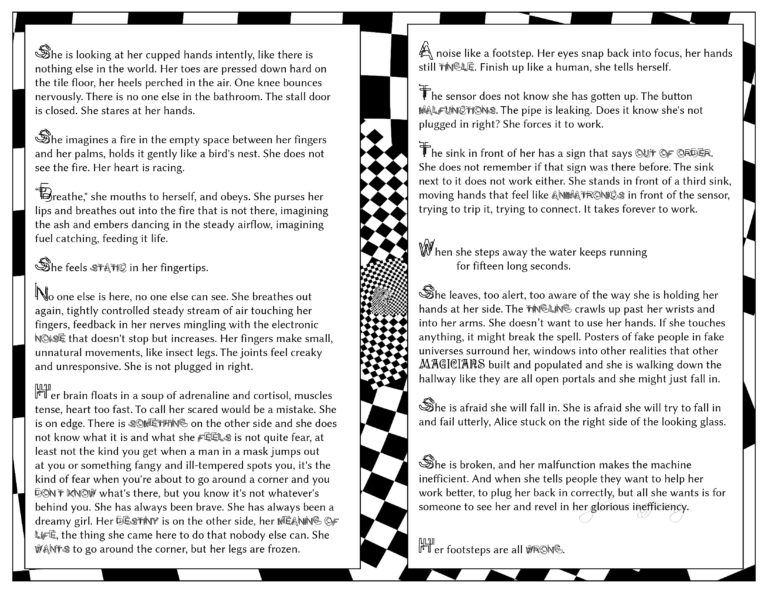 She is looking at her cupped hands intently, like there is nothing else in the world. Her toes are pressed down hard on the tile floor, her heels perched in the air. One knee bounces nervously. There is no one else in the bathroom. The stall door is closed. She stares at her hands.

She imagines a fire in the empty space between her fingers and her palms, holds it gently like a bird’s nest. She does not see the fire. Her heart is racing.

“Breathe,” she mouths to herself, and obeys. She purses her lips and breathes out into the fire that is not there, imagining the ash and embers dancing in the steady airflow, imagining fuel catching, feeding it life.

She feels static in her fingertips.

No one else is here, no one else can see. She breathes out again, tightly controlled steady stream of air touching her fingers, feedback in her nerves mingling with the electronic noise that doesn’t stop but increases. Her fingers make small, unnatural movements, like insect legs. The joints feel creaky and unresponsive. She is not plugged in right.

Her brain floats in a soup of adrenaline and cortisol, muscles tense, heart too fast. To call her scared would be a mistake. She is on edge. There is something on the other side and she does not know what it is and what she feels is not quite fear, at least not the kind you get when a man in a mask jumps out at you or something fangy and ill-tempered spots you, it’s the kind of fear when you’re about to go around a corner and you don’t know what’s there, but you know it’s not whatever’s behind you. She has always been brave. She has always been a dreamy girl. Her destiny is on the other side, her meaning of life, the thing she came here to do that nobody else can. She wants to go around the corner, but her legs are frozen.

A noise like a footstep. Her eyes snap back into focus, her hands still tingle. Finish up like a human, she tells herself.

The sensor does not know she has gotten up. The button malfunctions. The pipe is leaking. Does it know she’s not plugged in right? She forces it to work.

The sink in front of her has a sign that says out of order. She does not remember if that sign was there before. The sink next to it does not work either. She stands in front of a third sink, moving hands that feel like animatronics in front of the sensor, trying to trip it, trying to connect. It takes forever to work.

When she steps away the water keeps running
for fifteen long seconds.

She leaves, too alert, too aware of the way she is holding her hands at her side. The tingling crawls up past her wrists and into her arms. She doesn’t want to use her hands. If she touches anything, it might break the spell. Posters of fake people in fake universes surround her, windows into other realities that other magicians built and populated and she is walking down the hallway like they are all open portals and she might just fall in.

She is broken, and her malfunction makes the machine inefficient. And when she tells people they want to help her work better, to plug her back in correctly, but all she wants is for someone to see her and revel in her glorious inefficiency.

Her footsteps are all wrong.