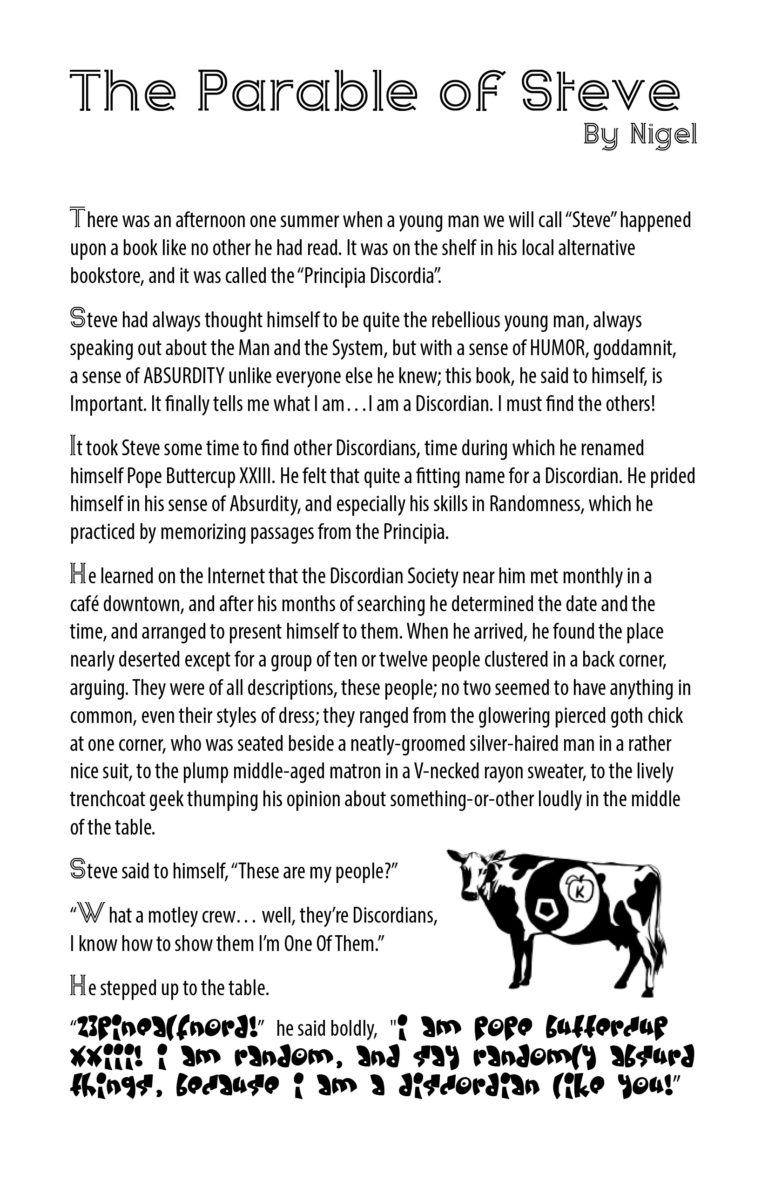 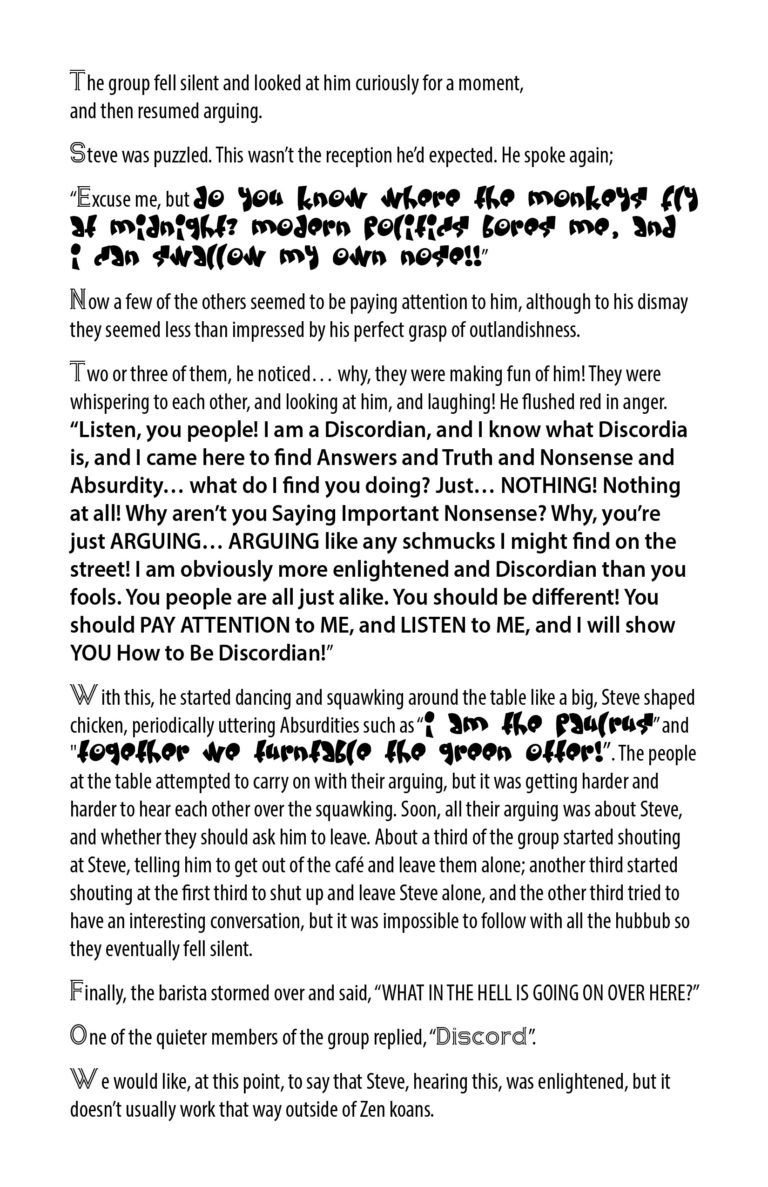 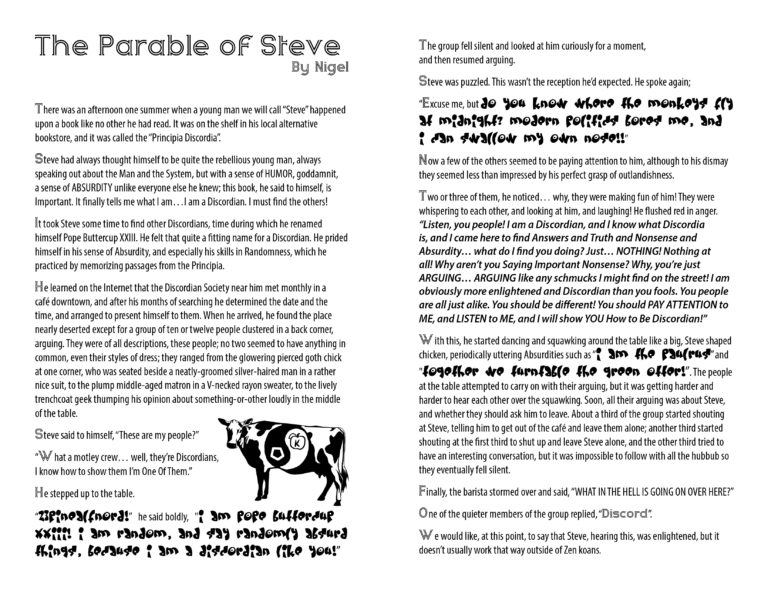 The Parable of Steve
By Nigel

There was an afternoon one summer when a young man we will call “Steve” happened upon a book like no other he had read. It was on the shelf in his local alternative bookstore, and it was called the “Principia Discordia”.

Steve had always thought himself to be quite the rebellious young man, always speaking out about the Man and the System, but with a sense of HUMOR, goddamnit, a sense of ABSURDITY unlike everyone else he knew; this book, he said to himself, is Important. It finally tells me what I am…I am a Discordian. I must find the others!

It took Steve some time to find other Discordians, time during which he renamed himself Pope Buttercup XXIII. He felt that quite a fitting name for a Discordian. He prided himself in his sense of Absurdity, and especially his skills in Randomness, which he practiced by memorizing passages from the Principia.

He learned on the Internet that the Discordian Society near him met monthly in a café downtown, and after his months of searching he determined the date and the time, and arranged to present himself to them. When he arrived, he found the place nearly deserted except for a group of ten or twelve people clustered in a back corner, arguing. They were of all descriptions, these people; no two seemed to have anything in common, even their styles of dress; they ranged from the glowering pierced goth chick at one corner, who was seated beside a neatly-groomed silver-haired man in a rather nice suit, to the plump middle-aged matron in a V-necked rayon sweater, to the lively trenchcoat geek thumping his opinion about something-or-other loudly in the middle of the table.
Steve said to himself, “These are my people?”
“What a motley crew… well, they’re Discordians, I know how to show them I’m One Of Them.”
He stepped up to the table.
“23PINEALFNORD!” he said boldly, “I am Pope Buttercup XXIII! I am random, and say randomly absurd things, because I am a Discordian like you!”

The group fell silent and looked at him curiously for a moment, and then resumed arguing. Steve was puzzled. This wasn’t the reception he’d expected. He spoke again; “Excuse me, but do you know where the monkeys fly at midnight? Modern politics bores me, and I can swallow my own nose!!”

Now a few of the others seemed to be paying attention to him, although to his dismay they seemed less than impressed by his perfect grasp of outlandishness. Two or three of them, he noticed… why, they were making fun of him! They were whispering to each other, and looking at him, and laughing! He flushed red in anger.

“Listen, you people! I am a Discordian, and I know what Discordia is, and I came here to find Answers and Truth and Nonsense and Absurdity… what do I find you doing? Just… NOTHING! Nothing at all! Why aren’t you Saying Important Nonsense? Why, you’re just
ARGUING… ARGUING like any schmucks I might find on the street! I am obviously more enlightened and Discordian than you fools. You people are all just alike. You should be different! You should PAY ATTENTION to ME, and LISTEN to ME, and I will show YOU How to Be Discordian!”
With this, he started dancing and squawking around the table like a big, Steve shaped chicken, periodically uttering Absurdities such as “I AM THE PAULRUS” and “TOGETHER WE TURNTABLE THE GREEN OTTER!”

The people at the table attempted to carry on with their arguing, but it was getting harder and harder to hear each other over the squawking. Soon, all their arguing was about Steve, and whether they should ask him to leave. About a third of the group started shouting at Steve, telling him to get out of the café and leave them alone; another third started shouting at the first third to shut up and leave Steve alone, and the other third tried to have an interesting conversation, but it was impossible to follow with all the hubbub so they eventually fell silent.
Finally, the barista stormed over and said, “WHAT IN THE HELL IS GOING ON OVER HERE?”
One of the quieter members of the group replied, “Discord.”

We would like, at this point, to say that Steve, hearing this, was enlightened, but it doesn’t usually work that way outside of Zen koans.