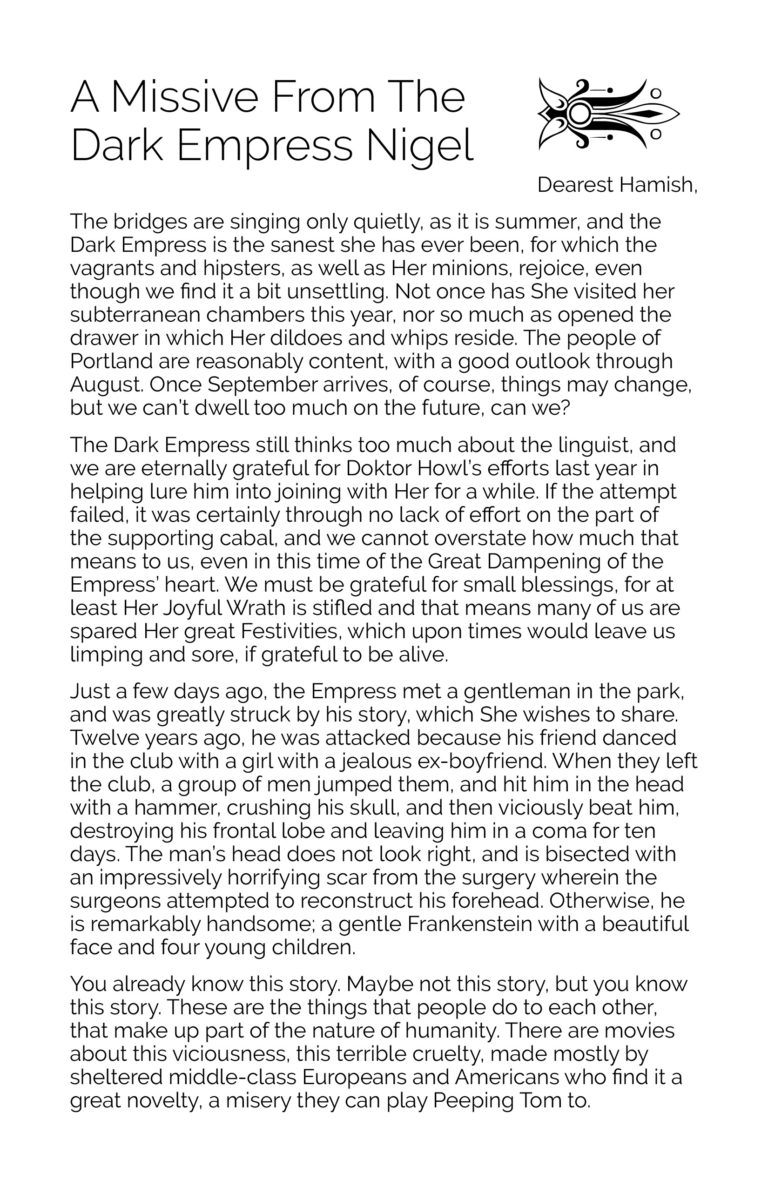 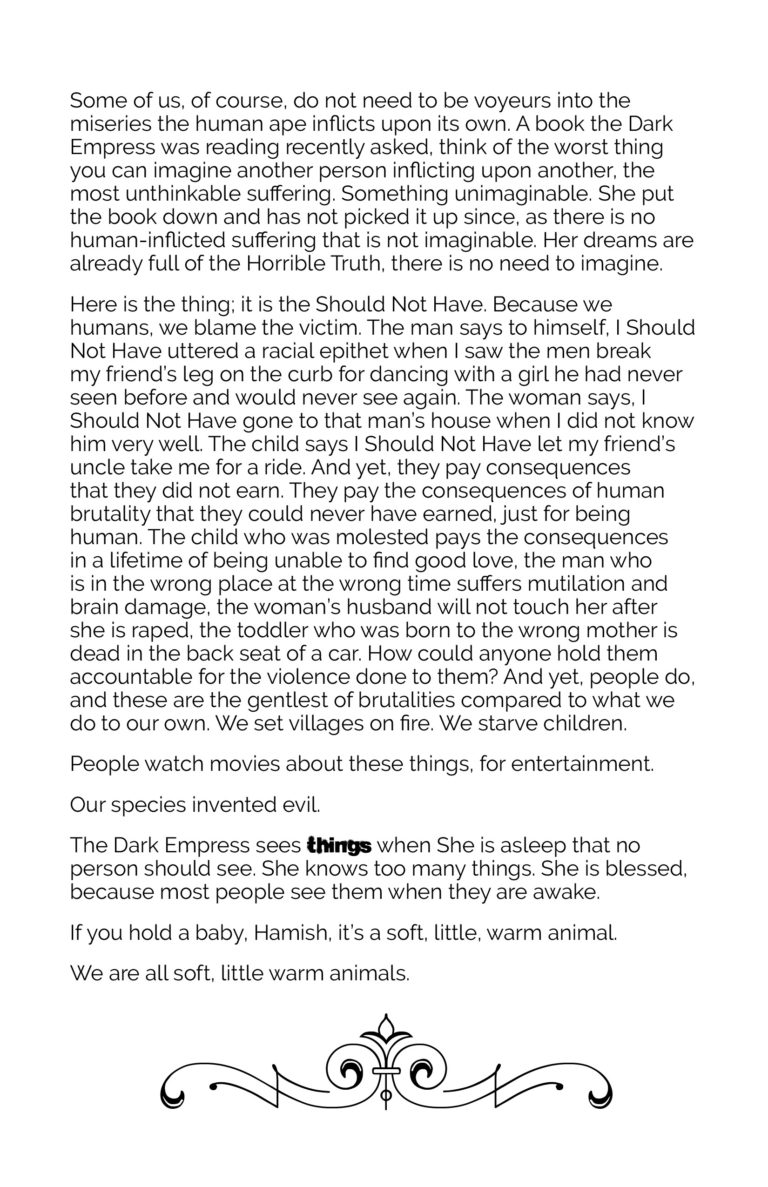 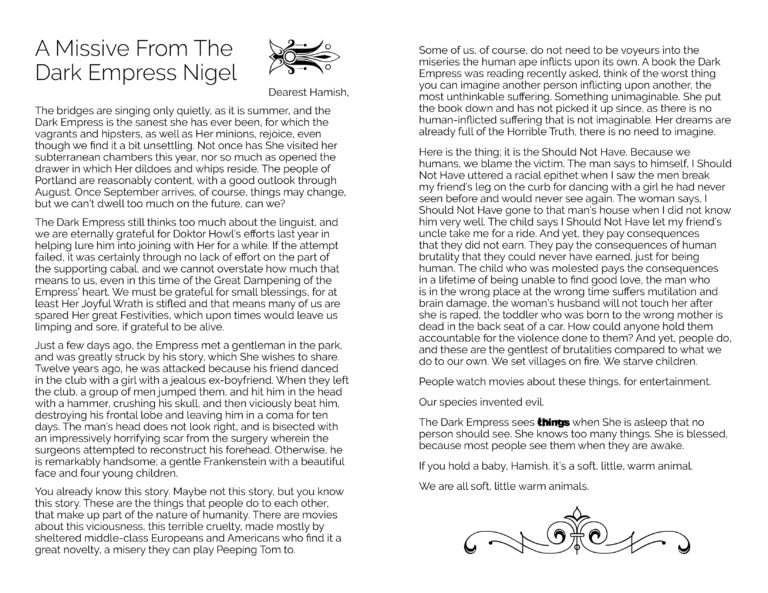 A Missive from the Dark Empress Nigel

Dearest Hamish,
The bridges are singing only quietly, as it is summer, and the Dark Empress is the sanest she has ever been, for which the vagrants and hipsters, as well as Her minions, rejoice, even though we find it a bit unsettling. Not once has She visited her subterranean chambers this year, nor so much as opened the drawer in which Her dildoes and whips reside. The people of Portland are reasonably content, with a good outlook through August. Once September arrives, of course, things may change, but we can’t dwell too much on the future, can we?

The Dark Empress still thinks too much about the linguist, and we are eternally grateful for Doktor Howl’s efforts last year in helping lure him into joining with Her for a while. If the attempt failed, it was certainly through no lack of effort on the part of the supporting cabal, and we cannot overstate how much that means to us, even in this time of the Great Dampening of the Empress’ heart. We must be grateful for small blessings, for at least Her Joyful Wrath is stifled and that means many of us are spared Her great Festivities, which upon times would leave us limping and sore, if grateful to be alive.

Just a few days ago, the Empress met a gentleman in the park, and was greatly struck by his story, which She wishes to share. Twelve years ago, he was attacked because his friend danced in the club with a girl with a jealous ex-boyfriend. When they left the club, a group of men jumped them, and hit him in the head with a hammer, crushing his skull, and then viciously beat him, destroying his frontal lobe and leaving him in a coma for ten days. The man’s head does not look right, and is bisected with an impressively horrifying scar from the surgery wherein the surgeons attempted to reconstruct his forehead. Otherwise, he is remarkably handsome; a gentle Frankenstein with a beautiful face and four young children.

You already know this story. Maybe not this story, but you know this story. These are the things that people do to each other, that make up part of the nature of humanity. There are movies about this viciousness, this terrible cruelty, made mostly by sheltered middle-class Europeans and Americans who find it a great novelty, a misery they can play Peeping Tom to.

Some of us, of course, do not need to be voyeurs into the miseries the human ape inflicts upon its own. A book the Dark Empress was reading
recently asked, think of the worst thing you can imagine another person inflicting upon another, the most unthinkable suffering. Something
unimaginable. She put the book down and has not picked it up since, as there is no human-inflicted suffering that is not imaginable. Her dreams are already full of the Horrible Truth, there is no need to imagine.

Here is the thing; it is the Should Not Have. Because we humans, we blame the victim. The man says to himself, I Should Not Have uttered a
racial epithet when I saw the men break my friend’s leg on the curb for dancing with a girl he had never seen before and would never see again. The woman says, I Should Not Have gone to that man’s house when I did not know him very well. The child says I Should Not Have let my friend’s uncle take me for a ride. And yet, they pay consequences that they did not earn. They pay the consequences of human brutality that they could never have earned, just for being human. The child who was molested pays the consequences in a lifetime of being unable to find good love, the man who is in the wrong place at the wrong time suffers mutilation and brain damage, the woman’s husband will not touch her after she is raped, the toddler who was born to the wrong mother is dead in the back seat of a car. How could anyone hold them accountable for the violence done to them? And yet, people do, and these are the gentlest of brutalities compared to what we do to our own. We set villages on fire. We starve children.

People watch movies about these things, for entertainment.

The Dark Empress sees things when She is asleep that no person should see. She knows too many things. She is blessed, because most people see them when they are awake.

If you hold a baby, Hamish, it’s a soft, little, warm animal.

We are all soft, little warm animals.