Systems Vs The System 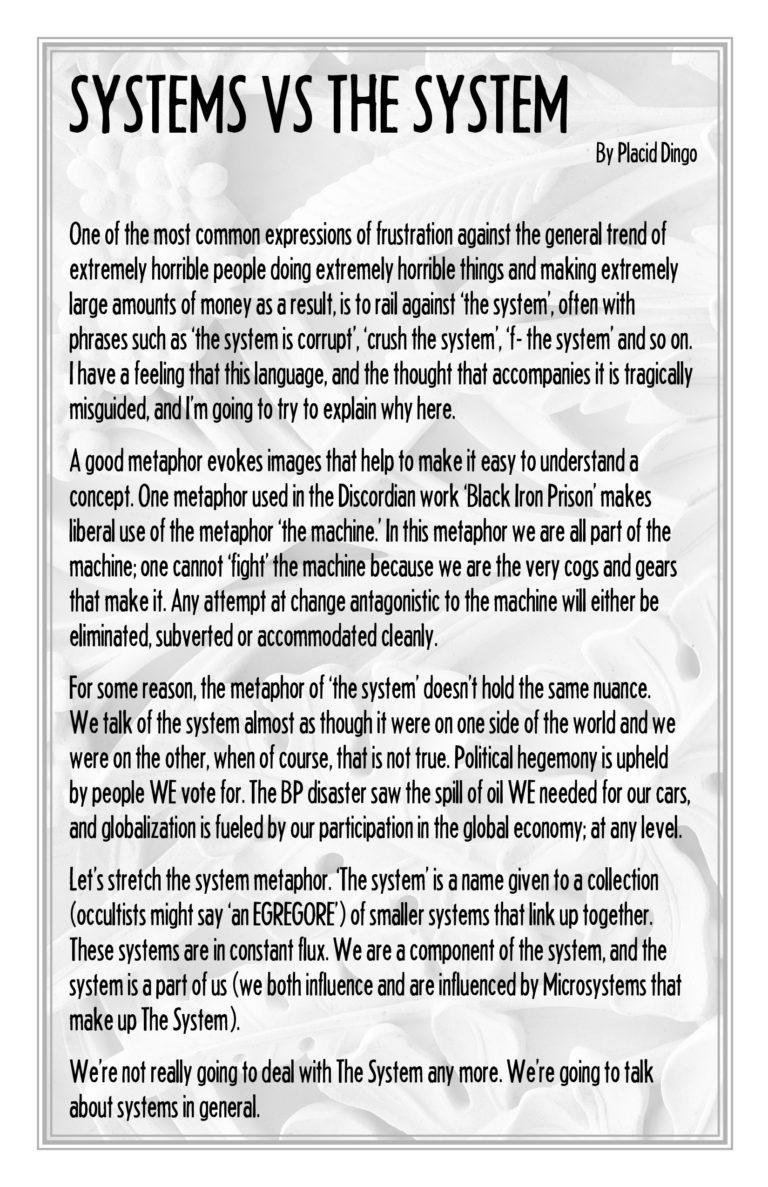 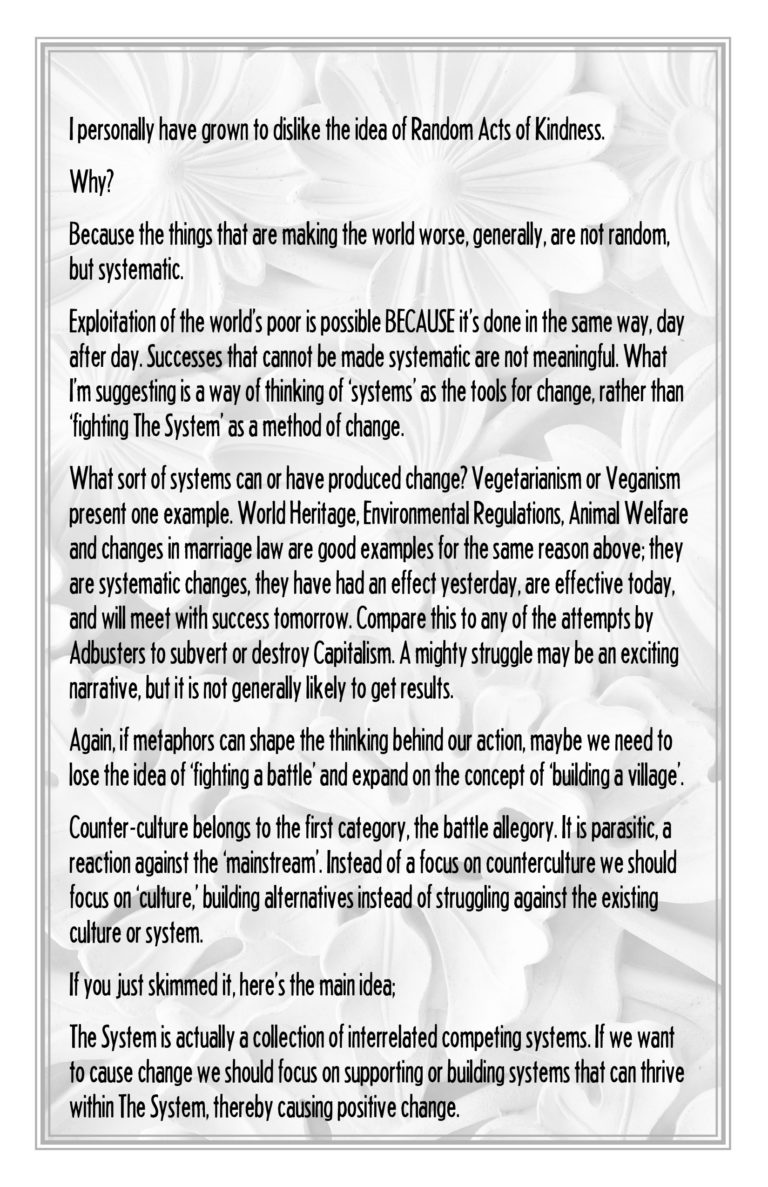 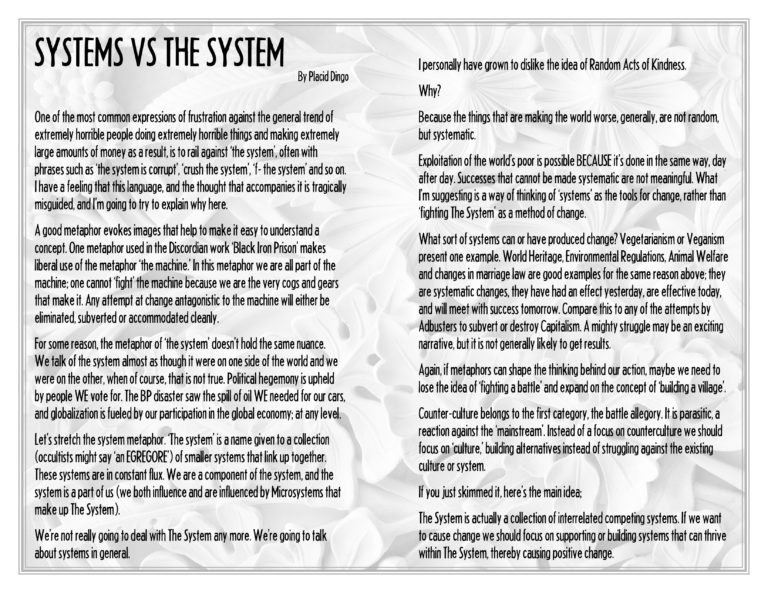 SYSTEMS VS THE SYSTEM
By Placid Dingo

One of the most common expressions of frustration against the general trend of extremely horrible people doing extremely horrible things and making extremely large amounts of money as a result, is to rail against ‘the system’, often with phrases such as ‘the system is corrupt’, ‘crush the system’, ‘f- the system’ and so on. I have a feeling that this language, and the thought that accompanies it is tragically misguided, and I’m going to try to explain why here.

A good metaphor evokes images that help to make it easy to understand a concept. One metaphor used in the Discordian work ‘Black Iron Prison’ makes liberal use of the metaphor ‘the machine.’ In this metaphor we are all part of the machine; one cannot ‘fight’ the machine because we are the very cogs and gears that make it. Any attempt at change antagonistic to the machine will either be eliminated, subverted or accommodated cleanly.

For some reason, the metaphor of ‘the system’ doesn’t hold the same nuance. We talk of the system almost as though it were on one side of the world and we were on the other, when of course, that is not true. Political hegemony is upheld by people WE vote for. The BP disaster saw the spill of oil WE needed for our cars, and globalization is fueled by our participation in the global economy; at any level.

Let’s stretch the system metaphor. ‘The system’ is a name given to a collection (occultists might say ‘an EGREGORE’) of smaller systems that link up together. These systems are in constant flux. We are a component of the system, and the system is a part of us (we both influence and are influenced by Microsystems that make up The System).

We’re not really going to deal with The System any more. We’re going to talk about systems in general.

I personally have grown to dislike the idea of Random Acts of Kindness.
Why?
Because the things that are making the world worse, generally, are not random, but systematic.

Exploitation of the world’s poor is possible BECAUSE it’s done in the same way, day after day. Successes that cannot be made systematic are not meaningful. What I’m suggesting is a way of thinking of ‘systems’ as the tools for change, rather than ‘fighting The System’ as a method of change.

What sort of systems can or have produced change? Vegetarianism or Veganism present one example. World Heritage, Environmental Regulations, Animal Welfare and changes in marriage law are good examples for the same reason above; they are systematic changes, they have had an effect yesterday, are effective today, and will meet with success tomorrow. Compare this to any of the attempts by Adbusters to subvert or destroy Capitalism. A mighty struggle may be an exciting narrative, but it is not generally likely to get results.

Again, if metaphors can shape the thinking behind our action, maybe we need to lose the idea of ‘fighting a battle’ and expand on the concept of ‘building a village’.

Counter-culture belongs to the first category, the battle allegory. It is parasitic, a reaction against the ‘mainstream’. Instead of a focus on counterculture we should focus on ‘culture,’ building alternatives instead of struggling against the existing
culture or system.
If you just skimmed it, here’s the main idea;
The System is actually a collection of interrelated competing systems. If we want to cause change we should focus on supporting or building systems that can thrive within The System, thereby causing positive change.