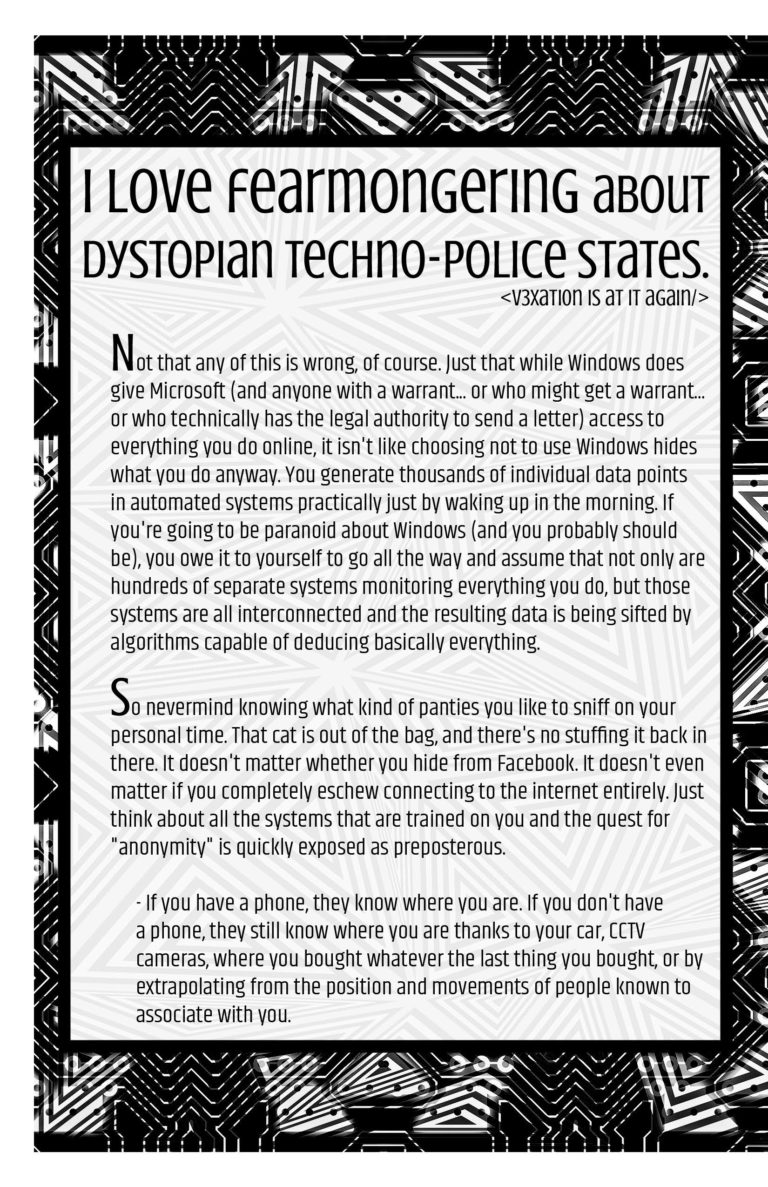 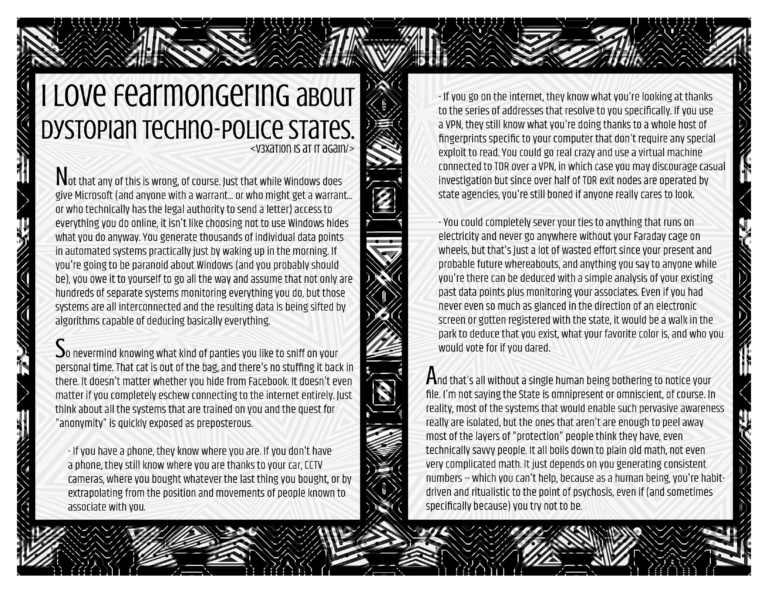 View as a PDF

Not that any of this is wrong, of course. Just that while Windows does give Microsoft (and anyone with a warrant… or who might get a warrant… or who technically has the legal authority to send a letter) access to everything you do online, it isn’t like choosing not to use Windows hides what you do anyway. You generate thousands of individual data points in automated systems practically just by waking up in the morning. If you’re going to be paranoid about Windows (and you probably should be), you owe it to yourself to go all the way and assume that not only are hundreds of separate systems monitoring everything you do, but those systems are all interconnected and the resulting data is being sifted by algorithms capable of deducing basically everything.

So nevermind knowing what kind of panties you like to sniff on your personal time. That cat is out of the bag, and there’s no stuffing it back in there. It doesn’t matter whether you hide from Facebook. It doesn’t even matter if you completely eschew connecting to the internet entirely. Just think about all the systems that are trained on you and the quest for “anonymity” is quickly exposed as preposterous.

– If you go on the internet, they know what you’re looking at thanks to the series of addresses that resolve to you specifically. If you use a VPN, they still know what you’re doing thanks to a whole host of fingerprints specific to your computer that don’t require any special exploit to read. You could go real crazy and use a virtual machine connected to TOR over a VPN, in which case you may discourage casual investigation but since over half of TOR exit nodes are operated by state agencies, you’re still boned if anyone really cares to look.

– You could completely sever your ties to anything that runs on electricity and never go anywhere without your Faraday cage on wheels, but that’s just a lot of wasted effort since your present and probable future whereabouts, and anything you say to anyone while you’re there can be deduced with a simple analysis of your existing past data points plus monitoring your associates. Even if you had never even so much as glanced in the direction of an electronic screen or gotten registered with the state, it would be a walk in the park to deduce that you exist, what your favorite color is, and who you would vote for if you dared.

And that’s all without a single human being bothering to notice your file. I’m not saying the State is omnipresent or omniscient, of course. In reality, most of the systems that would enable such pervasive awareness really are isolated, but the ones that aren’t are enough to peel away most of the layers of “protection” people think they have, even technically savvy people. It all boils down to plain old math, not even very complicated math. It just depends on you generating consistent numbers — which you can’t help, because as a human being, you’re habit driven and ritualistic to the point of psychosis, even if (and sometimes specifically because) you try not to be.