The Parable of Sal 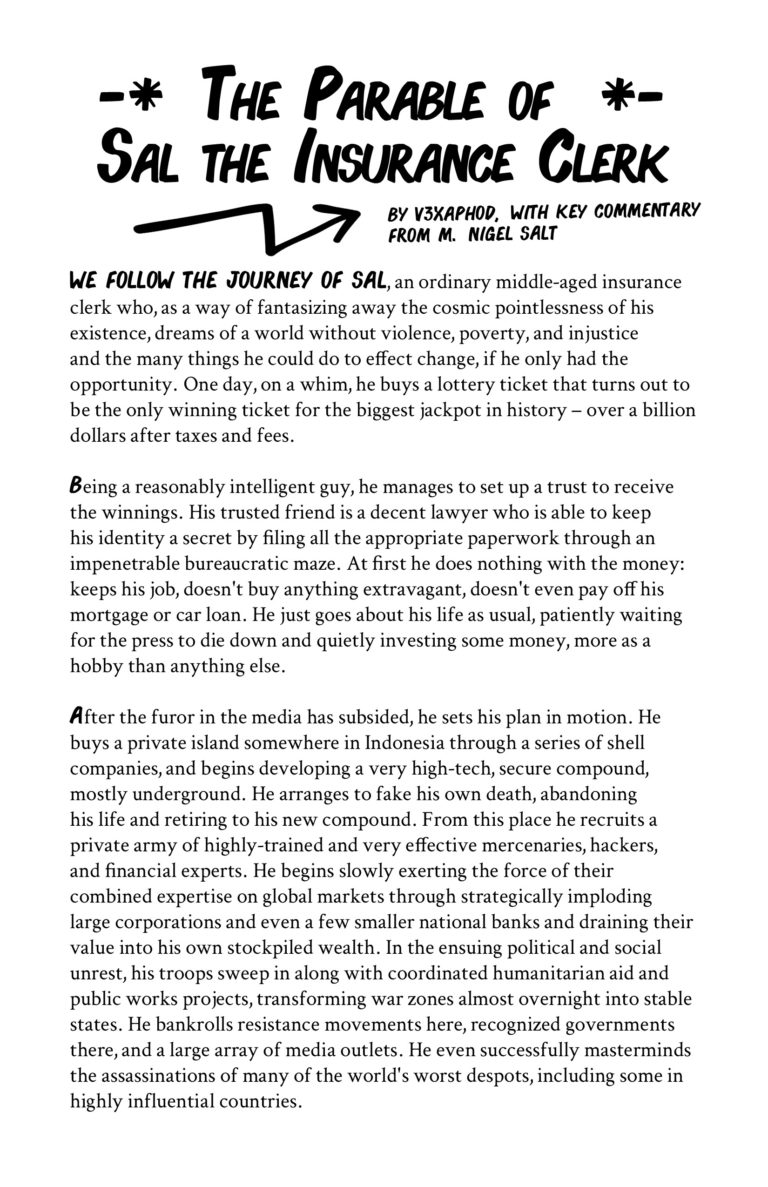 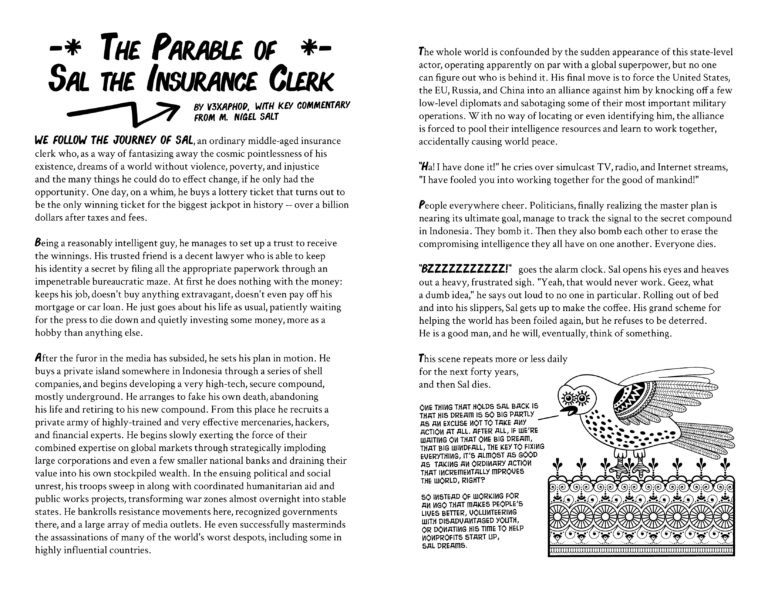 The Parable of Sal the Insurance Clerk

by V3xaphod, with key commentary from M. Nigel Salt

We follow the journey of Sal, an ordinary middle-aged insurance clerk who, as a way of fantasizing away the cosmic pointlessness of his existence, dreams of a world without violence, poverty, and injustice and the many things he could do to effect change, if he only had the opportunity. One day, on a whim, he buys a lottery ticket that turns out to be the only winning ticket for the biggest jackpot in history – over  a billion dollars after taxes and fees.

Being a reasonably intelligent guy, he manages to set up a trust to receive the winnings. His trusted friend is a decent lawyer who is able to keep his identity a secret by filing all the appropriate paperwork through an impenetrable bureaucratic maze. At first he does nothing with the money: keeps his job, doesn’t buy anything extravagant, doesn’t even pay off his mortgage or car loan. He just goes about his life as usual, patiently waiting for the press to die down and quietly investing some money, more as a hobby than anything else.

After the furor in the media has subsided, he sets his plan in motion. He buys a private island somewhere in Indonesia through a series of shell companies, and begins developing a very high-tech, secure compound, mostly underground. He arranges to fake his own death, abandoning his life and retiring to his new compound. From this place he recruits a private army of highly-trained and very effective mercenaries, hackers, and financial experts. He begins slowly exerting the force of their combined expertise on global markets through strategically imploding large corporations and even a few smaller national banks and draining their value into his own stockpiled wealth. In the ensuing political and social unrest, his troops sweep in along with coordinated humanitarian aid and public works projects, transforming war zones almost overnight into stable states. He bankrolls resistance movements here, recognized governments there, and a large array of media outlets. He even successfully masterminds the assassinations of many of the world’s worst despots, including some in highly influential countries.

The whole world is confounded by the sudden appearance of this state-level actor, operating apparently on par with a global superpower, but no one can figure out who is behind it. His final move is to force the United States, the EU, Russia, and China into an alliance against him by knocking off a few low-level diplomats and sabotaging some of their most important military operations. With no way of locating or even identifying him, the alliance is forced to pool their intelligence resources and learn to work together, accidentally causing world peace.

“Ha! I have done it!” he cries over simulcast TV, radio, and Internet streams, “I have fooled you into working together for the good of mankind!” People everywhere cheer. Politicians, finally realizing the master plan is nearing its ultimate goal, manage to track the signal to the secret compound in Indonesia. They bomb it. Then they also bomb each other to erase the compromising intelligence they all have on one another. Everyone dies.

“BZZZZZZZZZZZ!” goes the alarm clock. Sal opens his eyes and heaves out a heavy, frustrated sigh. “Yeah, that would never work. Geez, what a dumb idea,” he says out loud to no one in particular. Rolling out of bed and into his slippers, Sal gets up to make the coffee. His grand scheme for helping the world has been foiled again, but he refuses to be deterred. He is a good man, and he will, eventually, think of something.

This scene repeats more or less daily for the next forty years, and then Sal dies.

Commentary:
One thing that holds Sal back is that his dream is so big partly as an excuse not to take any action at all. After all, if we’re waiting on that one big dream, that big windfall, the key to fixing everything, it’s almost as good as taking an ordinary action that incrementally improves the world, right?

So instead of working for an NGO that makes people’s lives better, volunteering with disadvantaged youth, or donating his time  to help nonprofits start up, Sal dreams.