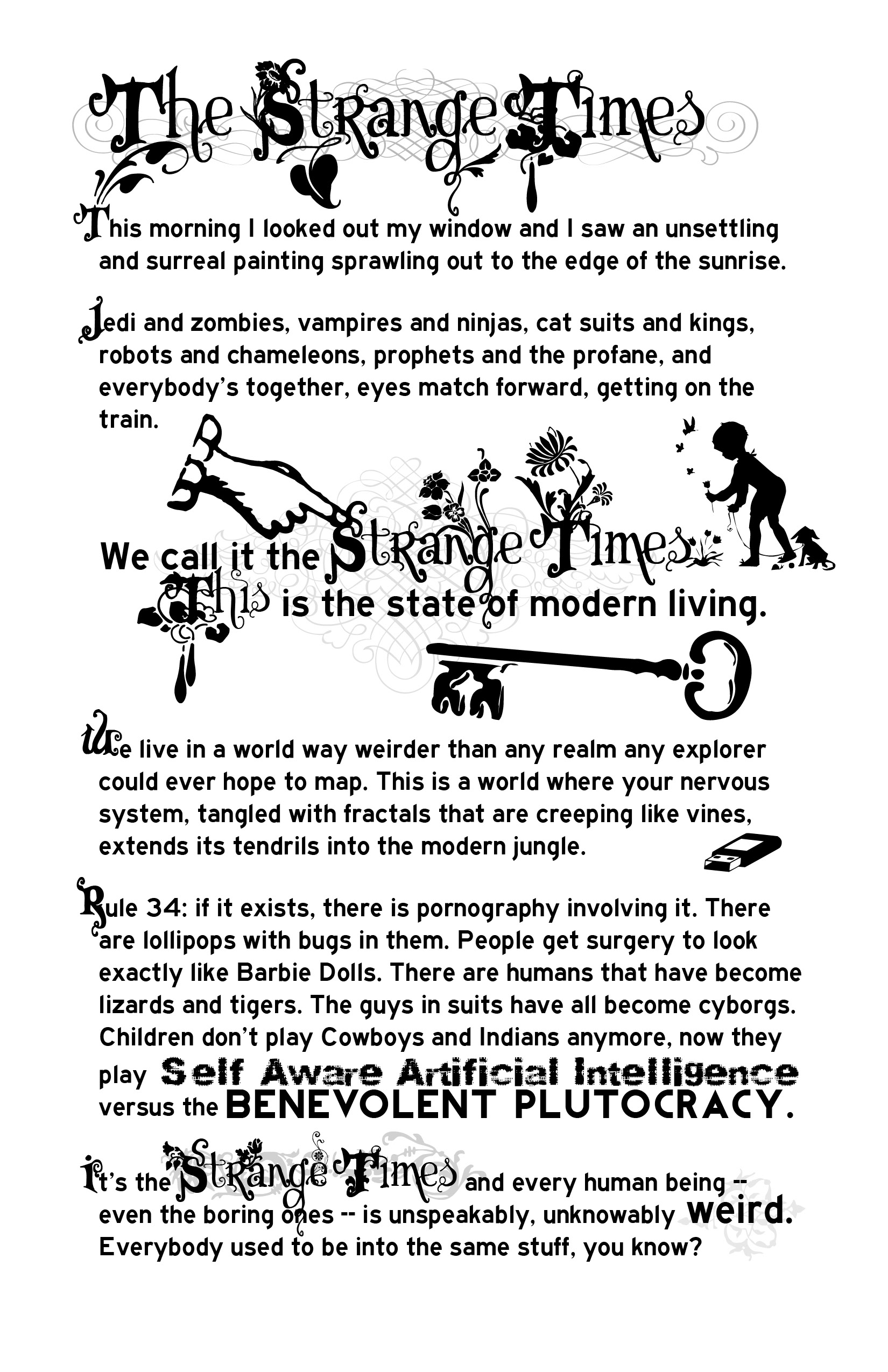 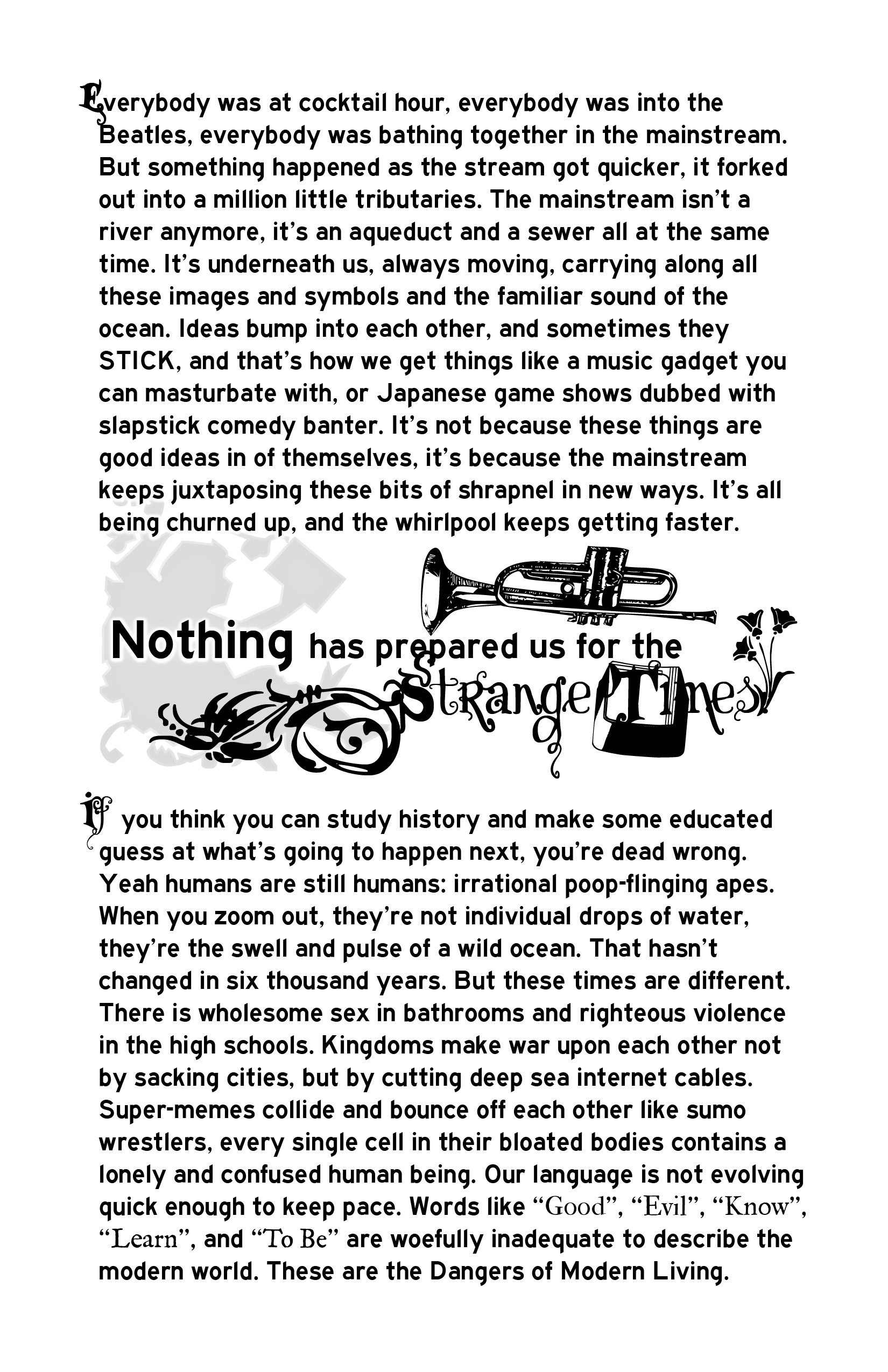 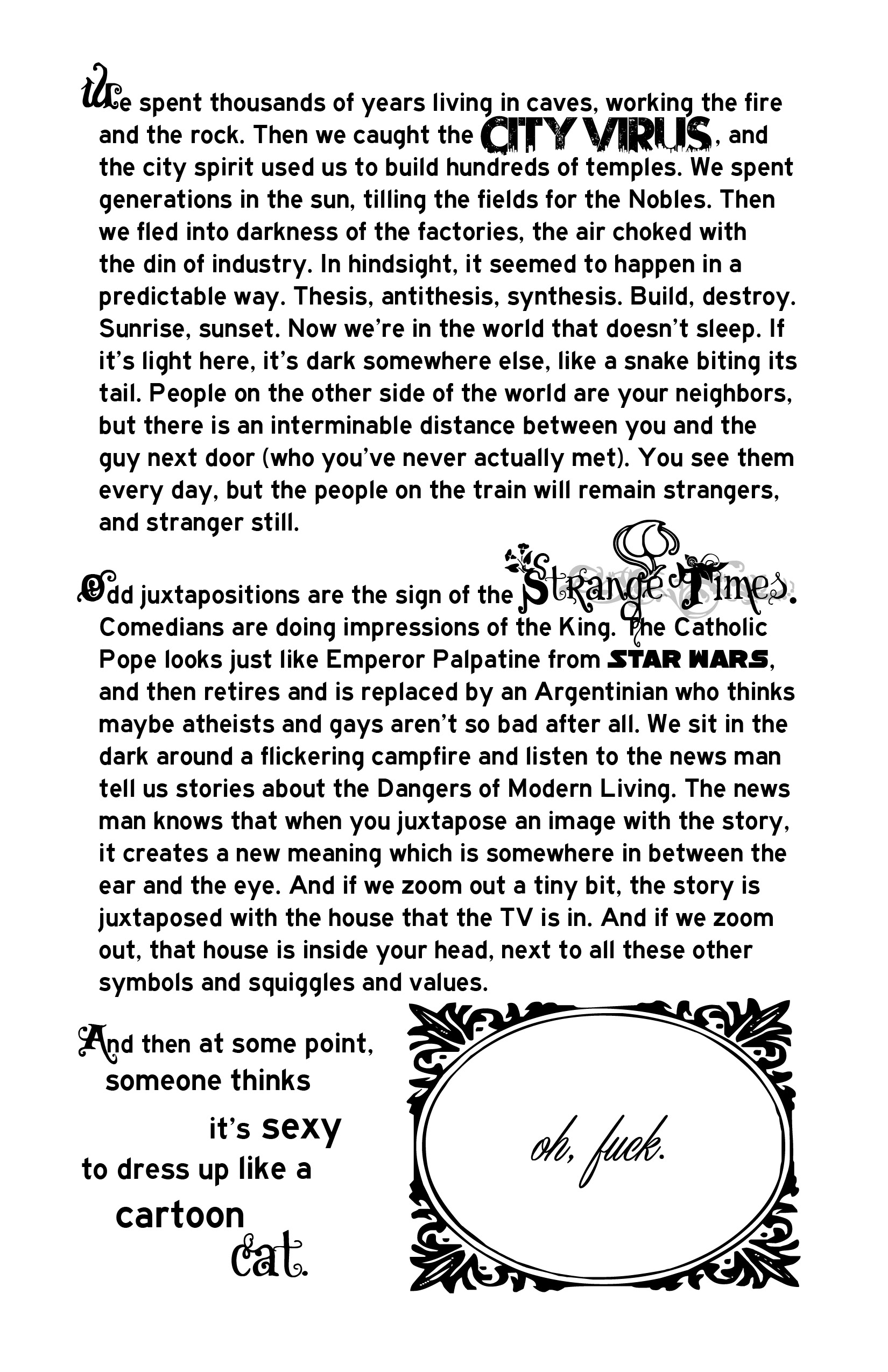 View/Download PDF
Print File for Booklets!
Transcript
The Strange Times – by Professor Cramulus – This morning I looked out my window and I saw an unsettling and surreal painting sprawling out to the edge of the sunrise. Jedi and zombies, vampires and ninjas, cat suits and kings, robots and chameleons, prophets and the profane, and everybody’s together, eyes match forward, getting on the train. We call it the Strange Times. This is the state of modern living. We live in a world way weirder than any realm any explorer would ever hope to map. This is a world where your nervous system, tangled with fractals that are creeping like vines, extends its tendrils into the modern jungle. Rule 34: if it exists, there is pornography involving it. There are lollipops with bugs in them. People get surgery to look exactly like Barbie Dolls. There are humans that have become lizards and tigers. The guys in suits have all become cyborgs. Children don’t play Cowboys and Indians anymore, now they play Self Aware Intelligence versus the Benevolent Plutocracy. It’s the Strange Times, and every human being – even the boring ones – is unspeakably, unknowably weird. Everybody used to be into the same stuff, you know? Everybody was at cocktail hour, everybody was into the Beatles, everybody was bathing together in the mainstream. But something happened and the stream got quicker, it forked out into a million little tributaries. The mainstream isn’t a river anymore, it’s an aqueduct and sewer all at the same time. It’s underneath us, always moving, carrying along all these images and symbols and the familiar sound of the ocean. Ideas bump into each other, and sometimes they STICK, and that’s how we get things like a music gadget you can masturbate with, or Japanese game shows dubbed with slapstick comedy banter. It’s not because these things are good ideas in of themselves, it’s because the mainstream keeps juxtaposing these bits of shrapnel in new ways. It’s all being churned up, and the whirlpool keeps getting faster. Nothing has prepared us for the Strange Times. If you think you can study history and make some educated guesses at what’s going to happen next, you’re dead wrong. Yeah, humans are still humans irrational poop-flinging apes. When you zoom out they’re not individual drops of water, they’re the swell and pulse of a wild ocean. That hasn’t changed in six thousand years. But these times are different. There’s wholesome sex in bathrooms and righteous violence in the high schools. Kingdoms make war upon each other not by sacking cities but by cutting deep sea internet cables. Super-memes collide and bounce off each other like sumo wrestlers, every single cell in their bloated bodies contains a lonely and confused human being. Our language is not evolving quick enough to keep pace. Words like “Good,” “Evil,” “Know,” “Learn,” and “To Be” are woefully inadequate to describe the modern world. These are the Dangers of Modern Living. We spent thousands of years living in caves, working the fire and the rock. Then we caught the City Virus and the city spirit used us to build hundreds of temples. We spent generations in the sun, tilling the fields for the Nobles. Then we fled into darkness of the factories, air choked with the din of industry. In hindsight, it seemed to happen in a predictable way. Thesis, antithesis, synthesis. Build, destroy. SUnrise, sunset. Now we’re in the world that doesn’t sleep. If it’s light here, it’s dark somewhere else, like a snake biting its tail. People on the other side of the world are your neighbors, but there is an interminable distance between you and the guy next door (who you’ve never actually met). You see them every day, but the people on the train will remain strangers, and stranger still. Odd juxtapositions are the sign of the Strange Times. Comedians are doing impressions of the King. The Catholic Pope looks just like Emperor Palpatine from Star Wars, and then retires and is replaced by and Argentinian who thinks maybe atheists and gays aren’t so bad after all. We sit in the dark around a flickering campfire and listen to the news man tell us stories about the Dangers of Modern Living. The news man knows that when you juxtapose an image with the story, it creates new meaning which is somewhere in between the ear and the eye. And if we zoom out a tiny bit, the story is juxtaposed with the house that the TV is in. And if we zoom out, that house is inside your head, next to all these other symbols and squiggles and values. And then at some point, someone thinks it’s sexy to dress up like a cartoon cat. (oh, fuck.) Nobody’s prepared us for the Strange Times, and there are literally billions of humans that can’t cope with it. They could deal with being serfs, they could deal with being soldiers, those are simple lives with simple choices. Now it’s come time to make a new story for themselves by assembling all these weird symbols into a lifestyle, a personality, a set of values. And they just don’t know how to do it. They look to culture to get clues for how to swim and be happy and break even in this weird wold, and all they see are porn models and ninja turtles and humane terrorism and the extreme left and the extreme right and nothing is centered. If it was as simple as dealing with the sun and the crops, however hard that might be, people would pull through and maintain. But there are a million choices and complexities ad nuances and shrapnel flying at you like throwing knives and pillow fights and semen and banana cream pies. We think it’s best to laugh. 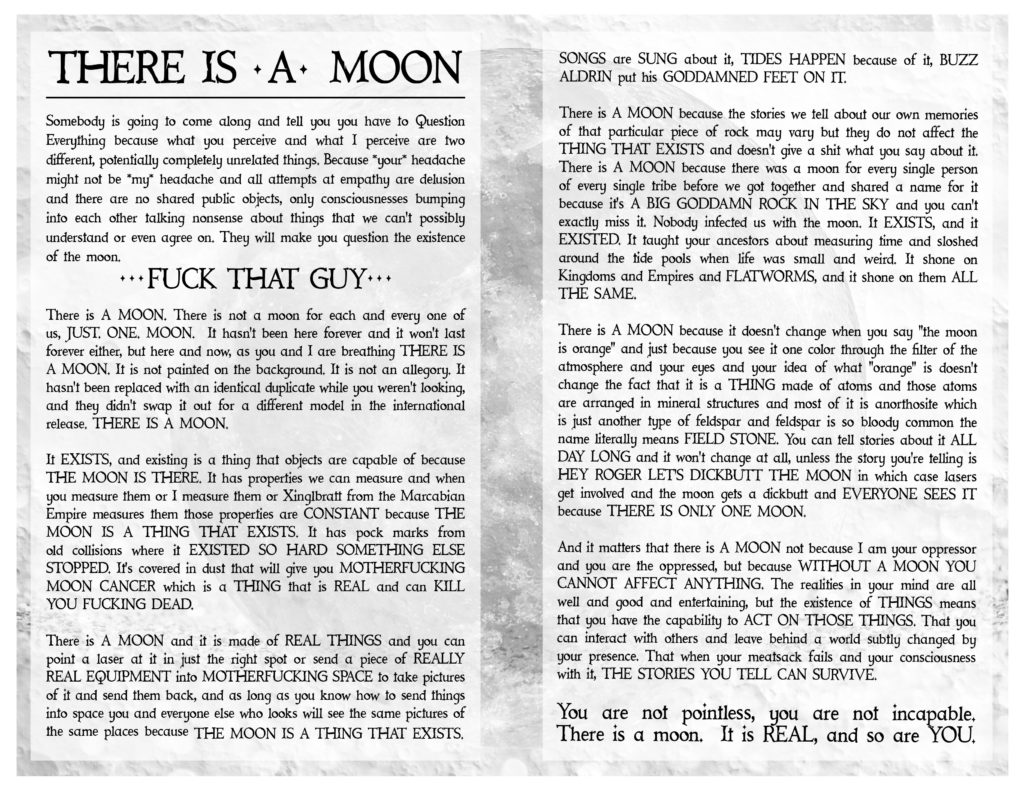 There Is A Moon 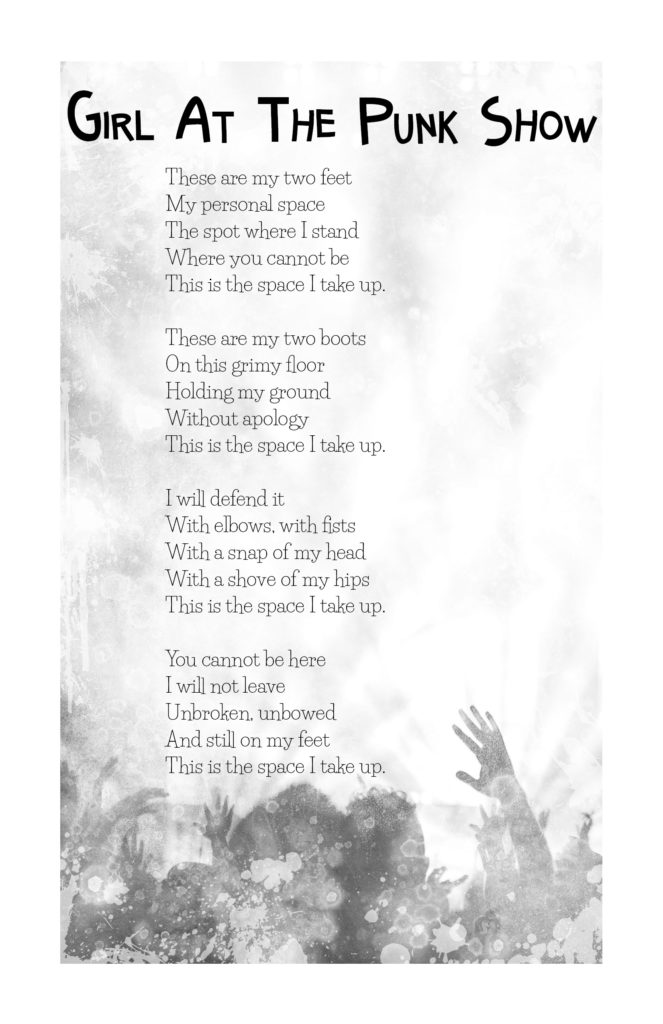 Girl At The Punk Show 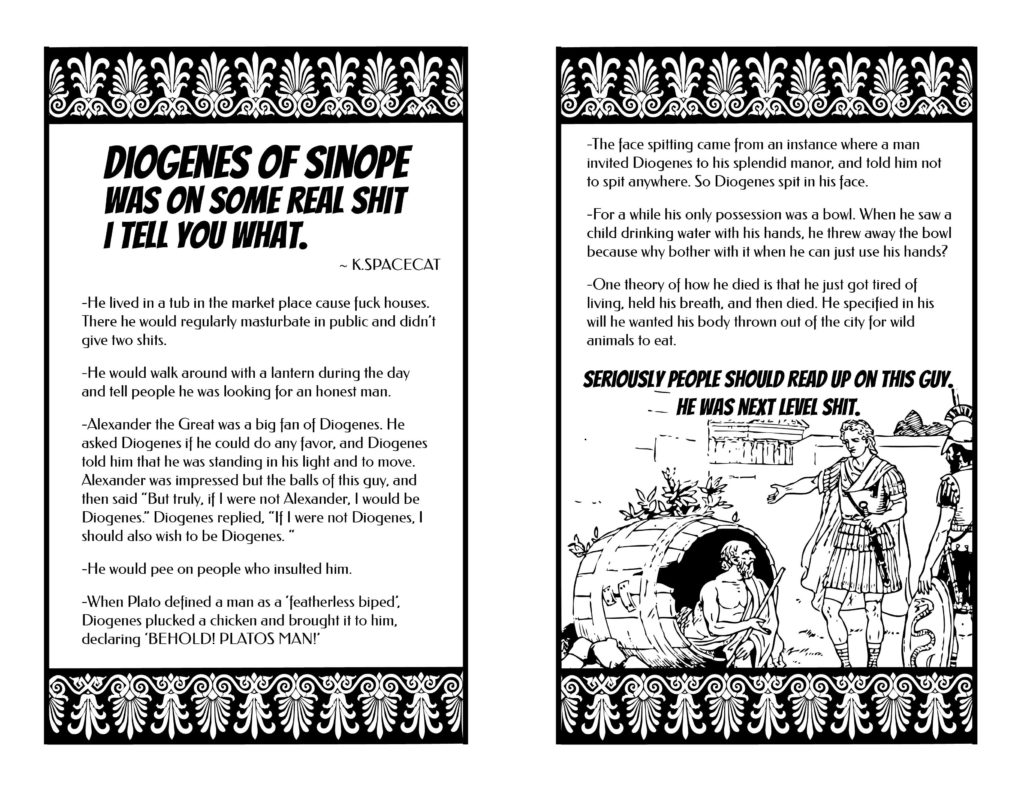 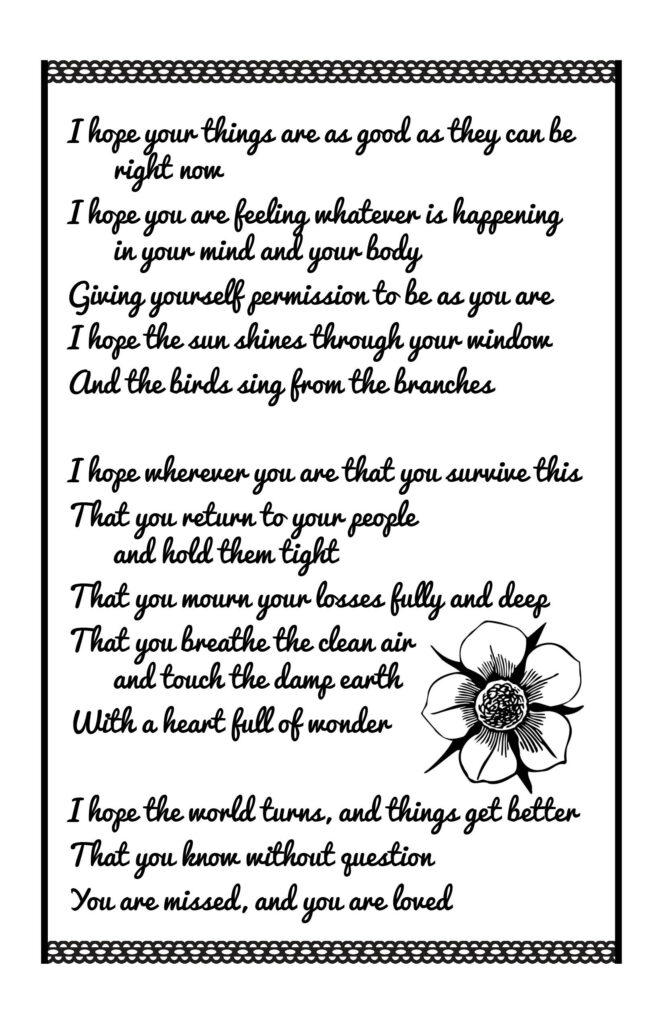 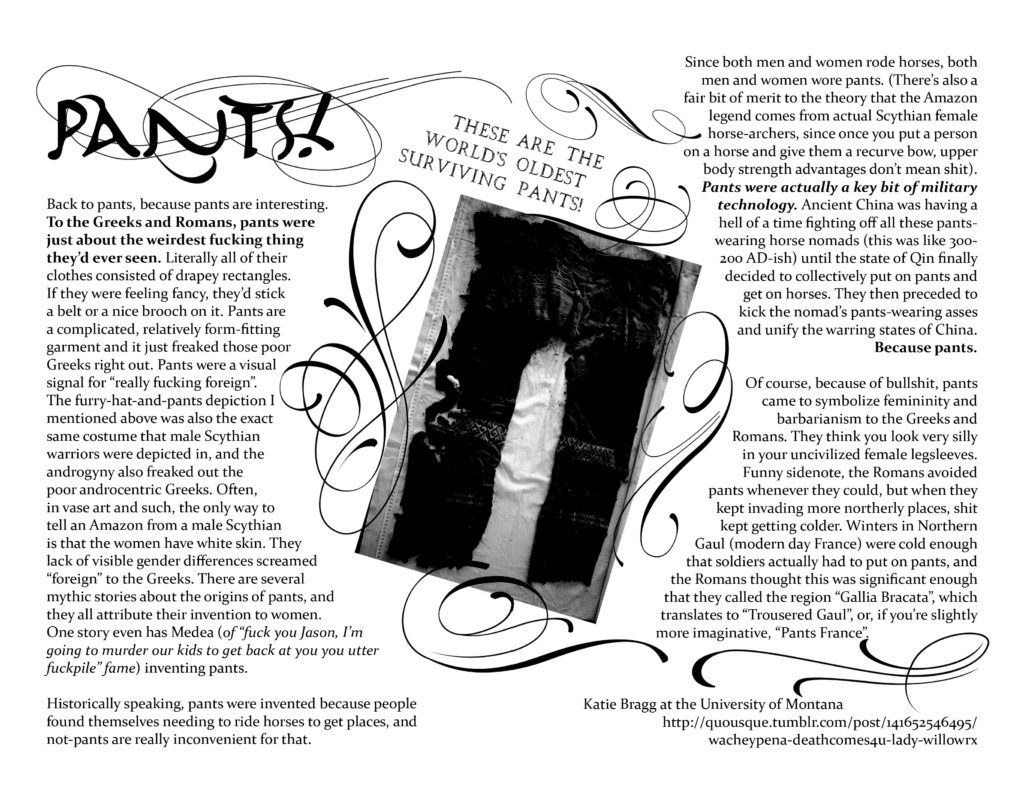 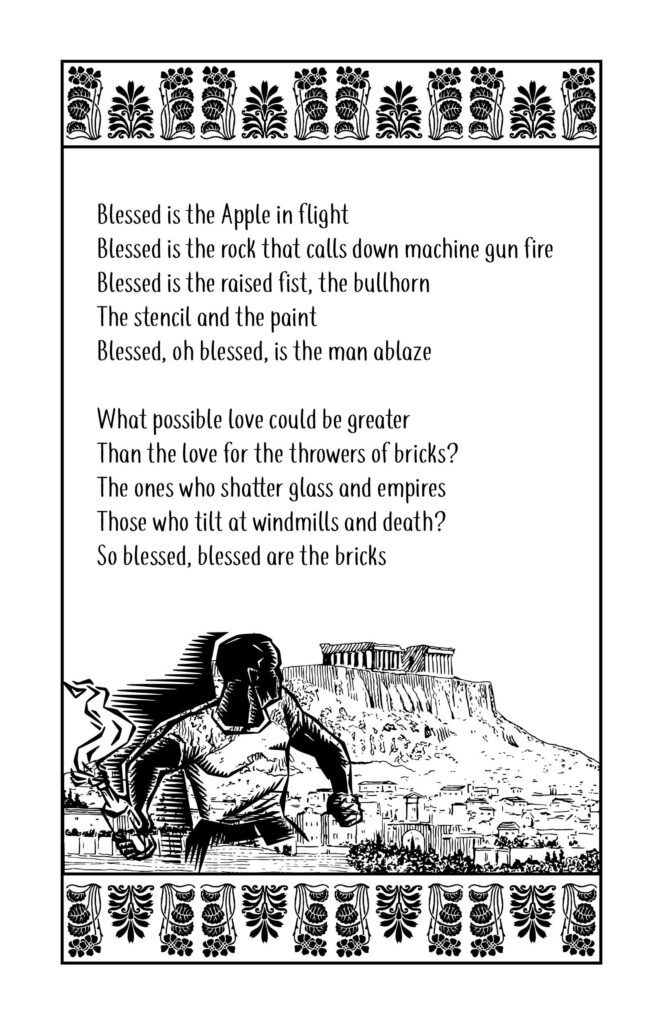 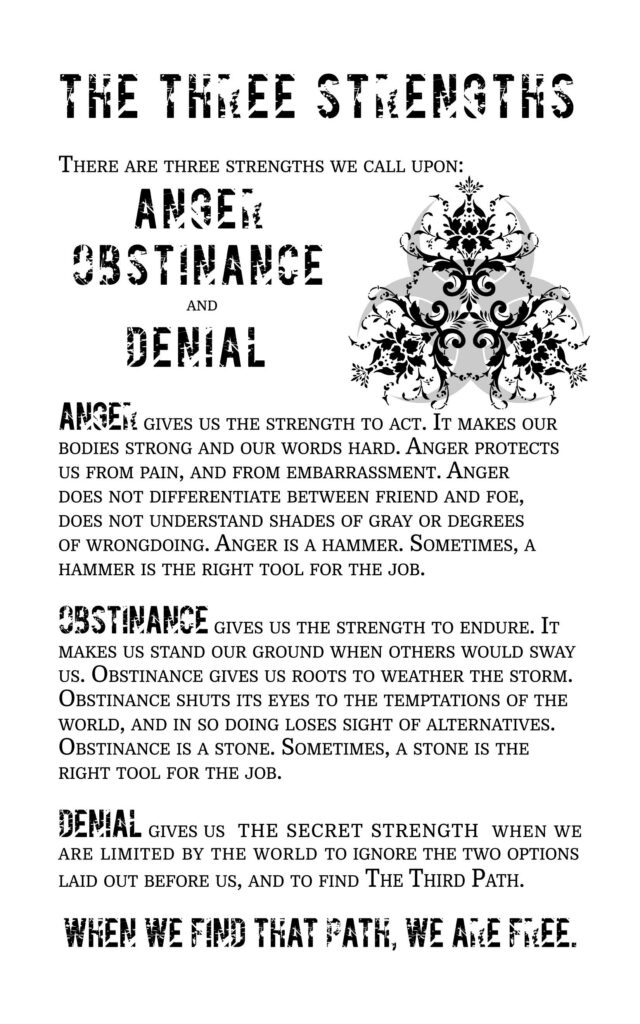 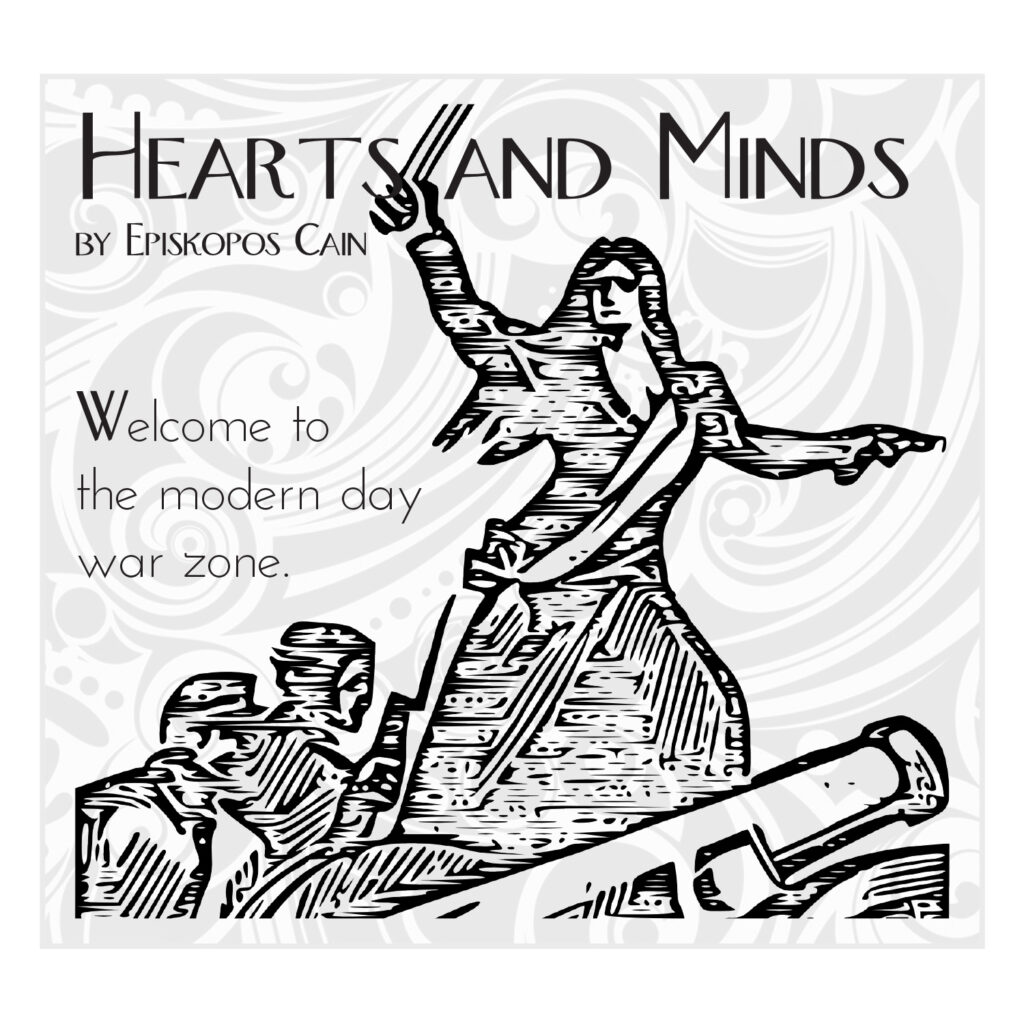 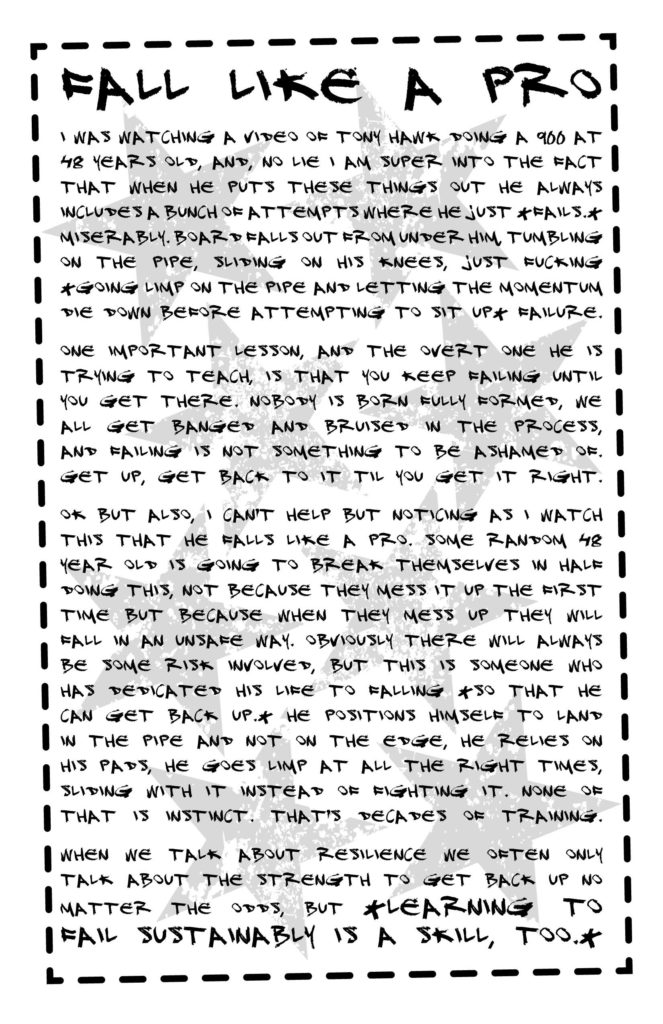 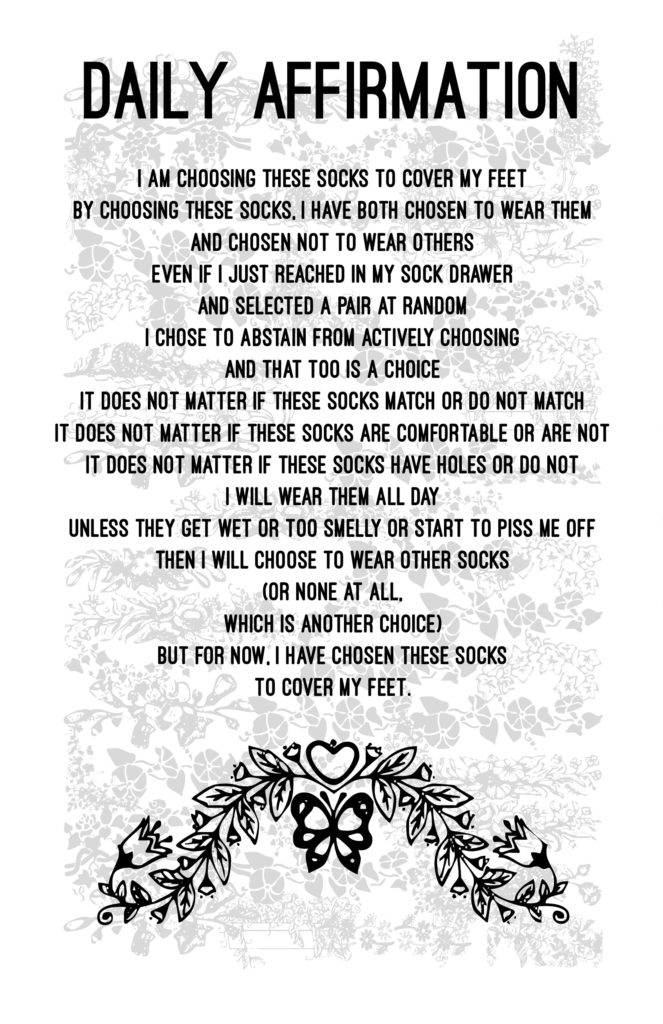